Jeffrey John Hanneman (January 31, 1964 – May 2, 2013) was an American musician, best known as a founding member and rhythm/lead guitarist of the American thrash metal band Slayer. Hanneman composed both music and lyrics for every Slayer album until his death in 2013 at age 49. He had his own signature guitar, the ESP Jeff Hanneman Signature model.

Hanneman was introduced to heavy metal music as a child through his older sister Mary, when she was listening to Black Sabbath at her house. Once he reached high school, he discovered hardcore punk, which had a significant influence on his style and attitude.

In 1981, Hanneman, who was working as a telemarketer at the time, met Kerry King, when King was auditioning for a southern rock band called “Ledger”. King remembered: “As I was leaving, I saw Jeff just kinda standing around playing guitar, and he was playing stuff that I was into, like Def Leppard’s ‘Wasted’ and AC/DC and Priest”. After the try-out session, the two guitarists started talking and playing Iron Maiden and Judas Priest songs. Slayer was born when King asked “Why don’t we start our own band?”, to which Hanneman replied “…Fuck yeah!”.

Hanneman stated that he was playing guitar for a year by the time he met King and put an effort into improving his skills after watching him play. Hanneman, who was heavily influenced by hardcore punk music, got the other members into the genre, leading Slayer into a faster and more aggressive approach. The band’s drummer Dave Lombardo asserted that his hardcore influences pushed him to play faster, contributing to shape his drumming style.

John Consterdine of Terrorizer magazine noted: “without Jeff Hanneman, Slayer certainly would not have created some of the most famous riffs in metal, which undoubtedly changed the entire genre”. According to Jeff Kitts of Guitar World, he “influenced a generation and changed the course of metal forever”. Alex Webster of Cannibal Corpse, who considers Hanneman his major influence as a composer, regarded him as “one of the greatest musicians and songwriters in metal” and Alexi Laiho of Children of Bodom described him as “one of the fathers of metal”.

Alex Skolnick of Testament asserted that he “wrote some of the best riffs of all time” and “he impacted music in such a way that an entire genre will never be the same”. According to Corey Taylor of Slipknot and Stone Sour, Hanneman is “one of the most underrated writers and underrated players that ever was” while Slash of Guns N’ Roses and Velvet Revolver defined him “the king of thrash/speed metal guitar”.

Hanneman used a black Gibson Les Paul modified with a Kahler Pro tremolo and a Joe Barden Two/Tone Humbucker bridge pickup in Slayer’s early days and through the Show No Mercy and Hell Awaits eras. There are also photos and videos of him playing a natural stain-finished Gibson Explorer during the band’s early days. In mid 1985 he began playing B.C. Rich guitars, notably a Rich Bich model he bought off his bandmate Kerry King and subsequently applied various graphics to. His first Bich had a 3×3 headstock, chrome hardware (including the Kahler Pro bridge) and two DiMarzio Super Distortion pickups. 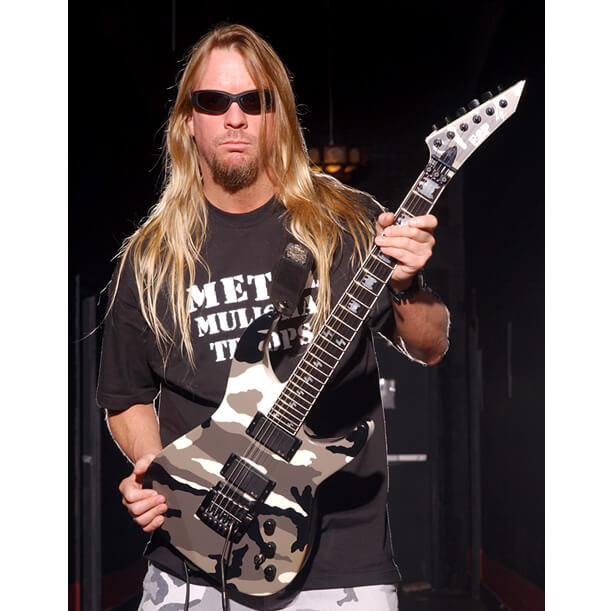