Jerry Fulton Cantrell Jr. (born March 18, 1966) is an American guitarist, singer and songwriter. He is best known as the founder, lead guitarist, co-lead vocalist, and main songwriter of rock band Alice in Chains. The band rose to international fame in the early 1990s during Seattle’s grunge movement, and is known for its distinctive vocal style and the harmonized vocals between Cantrell and Layne Staley (and later Cantrell and William DuVall). Cantrell started to sing lead vocals on Alice in Chains’ 1992 EP Sap.

He also has a solo career and released the albums Boggy Depot in 1998 and Degradation Trip Volumes 1 & 2 in 2002. His third solo album, Brighten was released on October 29, 2021. Cantrell has also collaborated and performed with Heart, Ozzy Osbourne, Metallica, Pantera, Circus of Power, Metal Church, Gov’t Mule, Damageplan, Pearl Jam, The Cult, Stone Temple Pilots, Danzig, Glenn Hughes, Duff McKagan and Deftones, among others.

Cantrell was named “Riff Lord” by British hard rock/metal magazine Metal Hammer in 2006. Guitar World Magazine ranked Cantrell as the 38th out of “100 Greatest Heavy Metal Guitarists of All Time” in 2004, and the 37th “Greatest Guitar Player of All Time” in 2012. Guitar World also ranked Cantrell’s solo in “Man in the Box” at No. 77 on its list of “100 Greatest Guitar Solos” in 2008. Cantrell has earned nine Grammy Award nominations as a member of Alice in Chains.

After Cantrell learned to write, he documented his goal on Dr. Seuss’ book, My Book About Me, filling in the sentence “When I grow up I want to be a…” with the words “rock star”.

Cantrell moved back with his mother to Spanaway where he attended junior high. His first job was delivering newspapers. Cantrell attended high school at Spanaway Lake High School, and, before owning his first guitar, he was a member of the high school choir which attended many state competitions. In his senior year, Cantrell became choir president, and the quartet sang the national anthem at basketball games and won competitions with the highest marks achievable. Cantrell has cited his interest in dark musical tones as dating back to this period: “In choir we performed a cappella Gregorian chants from the 14th and 15th centuries. It was scary church music.” His choir teacher and drama teacher were, early on, his two greatest motivators toward a career in music. When Alice in Chains’ first album went gold, Cantrell sent both teachers a gold record. He graduated from high school in 1984.

Cantrell picked up a guitar for the first time when he was in sixth grade. At that time he played clarinet, and his mother was dating a guitar player who handed his guitar to Cantrell and taught him a couple of chords. Cantrell picked it up very quickly, impressing his mother’s boyfriend who suggested that she should buy her son a guitar, so she bought him an acoustic guitar. It would not be until the age of 17 that he began seriously playing an electric guitar. Cantrell learned to play guitar by ear, emulating his heroes. In his mid-teens he bought his first guitar from a swap meet, a Korean-made Fender Stratocaster.

The first album that Cantrell owned was Elton John’s 1974 Greatest Hits compilation, which was a gift he received from his father when he was 10 years old. He noted in an interview that he was “raised on country music” as a youth and that he admires the emotion conveyed in the genre. He also considers himself “half Yankee and half redneck”. However, hard rock music caught Cantrell’s interest predominantly. He would later cite guitarists such as Jimi Hendrix, Ace Frehley, Tony Iommi, Angus Young, Jimmy Page, Glenn Tipton, K.K. Downing, David Gilmour, Nancy Wilson, and Eddie Van Halen as major influences, as well as Elton John and bands Fleetwood Mac, Heart and Rush as his early songwriting idols. Cantrell also cited Soundgarden as a big influence on him.

In 1985, Cantrell was going to winter semester of college, but he decided to quit it and moved to Dallas, Texas, to join a band with a couple of friends. Cantrell worked doing asbestos abatement around the Dallas and Houston area. He also worked at the music store Arnold and Morgan Music Company. While working at the store, Cantrell bought what he described as his first “real guitar”, a 1984 G&L Rampage. During that time, he had a band with Vinnie Chas (from Pretty Boy Floyd), called Sinister. Later they formed another band called Raze. While living in Dallas, Cantrell met an early incarnation of the band Pantera and started a long friendship with brothers Dimebag Darrell and Vinnie Paul. In 1985 or 1986, Cantrell moved back to Tacoma and began a band called Diamond Lie, which included singer Scott Damon, drummer Bobby Nesbitt and bassist Matt Muasau. The band started playing concerts in Tacoma and Seattle with the goal of getting a record deal. They recorded a four-song demo at London Bridge Studio.

Cantrell met Layne Staley, then Alice N’ Chains’ lead singer, at a party in Seattle around August 1987. He was homeless after being kicked out of his family’s house, so Staley invited Cantrell to live with him at the 24-hour rehearsal studio “The Music Bank”. Shortly after Cantrell moved in with Staley at the Music Bank, Alice ‘N Chains broke up.

Cantrell wanted to form a new band and Staley gave him the phone number of Melinda Starr, the girlfriend of drummer Sean Kinney, so that Cantrell could talk to him. Cantrell called the number and set up a meeting with Kinney. Kinney and his girlfriend went to the Music Bank and listened to Cantrell’s demos. Cantrell mentioned that they needed a bass player to jam with them and he had someone in mind: Mike Starr, with whom Cantrell had played in a band in Burien called Gypsy Rose. Kinney pointed at his girlfriend and said: “that’s weird cause that’s his sister”. Kinney called Starr and a few days later they started jamming with Cantrell at the Music Bank, but they didn’t have a singer.

Staley was already starting up another band, but Cantrell, Starr and Kinney wanted him to be their lead singer. They started auditioning terrible lead singers in front of Staley to send a hint. The last straw for Staley was when they auditioned a male stripper – he decided to join the band after that. Staley, who was Cantrell’s roommate at the time, agreed to join on the condition that Cantrell join his funk project (which ended shortly after), and Staley joined Cantrell’s band on a full-time basis. The band had names like “Mothra”, “Fuck” and “Diamond Lie”, the latter being the name of Cantrell’s previous band. Diamond Lie gained attention in the Seattle area and eventually took the name of Staley’s previous band, Alice N’ Chains, and was quickly renamed as Alice in Chains.

Cantrell attended a Guns N’ Roses concert at the Seattle Center in 1988, and took an Alice in Chains demo tape to give to the band. He met Axl Rose after the show and gave him the tape. As he was walking away, Cantrell saw Rose throwing the demo away. Years later, Guns N’ Roses chose Alice in Chains to be the opening act of their 2016 reunion tour.

Cantrell’s early influences made Alice in Chains’ heavy metal tones stand out among their fellow grunge/alternative rock-oriented bands of the Seattle music scene. However, his musical range also extends into elements of blues and country as heard on his solo debut album. Cantrell’s guitar playing is known for its unique use of wah pedal as well as odd time signatures. Cantrell has been most famously seen playing a G&L Guitars’ Rampage model. The two models most closely identified with Cantrell are instruments manufactured in the 1980s. They feature a maple body, maple neck and ebony fingerboard. The bridge is a Kahler Tremolo as opposed to a Floyd Rose tremolo which was commonly seen on instruments made throughout the 1980s and 90s. The guitars feature a single-bridge humbucker wired to a volume control. 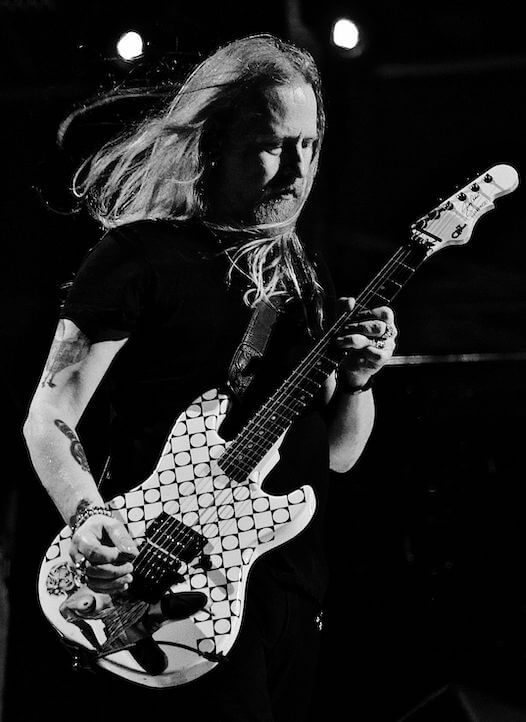