King was born in Los Angeles, California. King attended Warren High School in Downey, California, and started learning guitar at Calvano’s Music in South Gate. In 1981, King was at an audition trying out for the position of guitarist when he approached Jeff Hanneman, who was playing guitar at the reception desk, and said they should jam together and see if they liked playing together. King and Hanneman subsequently decided to start their own band, which would soon evolve into Slayer. King, along with bassist/vocalist Tom Araya, remained in Slayer for the entire length of the band’s career, from 1981 to 2019. In 1984, King was invited by Dave Mustaine to join Megadeth. Although King did agree to perform live with them, he ultimately did not join full time due to his commitment to Slayer.

In addition to appearing on Slayer’s albums, he has also made several guest appearances for other artists. While lending production to 1986’s Reign in Blood, Rick Rubin was also helping with the production of the Beastie Boys’ debut album Licensed to Ill. Rubin felt the track “No Sleep till Brooklyn” needed a guitar solo, so he called in King to lay down the part. King has since commented that his playing ability “certainly wasn’t that of a virtuoso”. King contributed the main lead guitar solo and outro part to Pantera’s song “Goddamn Electric”, which appeared on the 2000 album, Reinventing the Steel. On October 21, 2010, the final date of the Jägermeister Music Tour, King joined Megadeth on stage at the Gibson Amphitheater in Hollywood to perform “Rattlehead” which was the first time in 26 years that King had shared the stage with Megadeth.

King’s first experience with a guitar was when he was a child. Steve Huey of AllMusic has commented in his review for Reign in Blood that Kerry King and Jeff Hanneman’s demented soloing often mimics the screams of the songs’ victims. He also described his and Jeff Hanneman’s guitar solos as “wildly chaotic”. Thom Jurek, also of AllMusic, described his work on 2006’s Christ Illusion as creating “an intensely harrowing and angular riff that changes from verse to verse, through the refrain and bridge, and comes back again.”

King listed Venom, Judas Priest, Iron Maiden, Mercyful Fate, Deep Purple and Black Sabbath as his favorite bands during his teen years. He said once “Anybody who plays heavy music and doesn’t cite Sabbath as an influence is lying, because that’s where it all started.” He cited Glenn Tipton and K. K. Downing of Judas Priest as his biggest influences as a guitarist that inspire his style, tone, and gear. He mentioned Eddie Van Halen, Ted Nugent, Ronnie Montrose, Tony Iommi, Ritchie Blackmore, Michael Schenker, Dave Murray, Adrian Smith and Randy Rhoads as other influences. 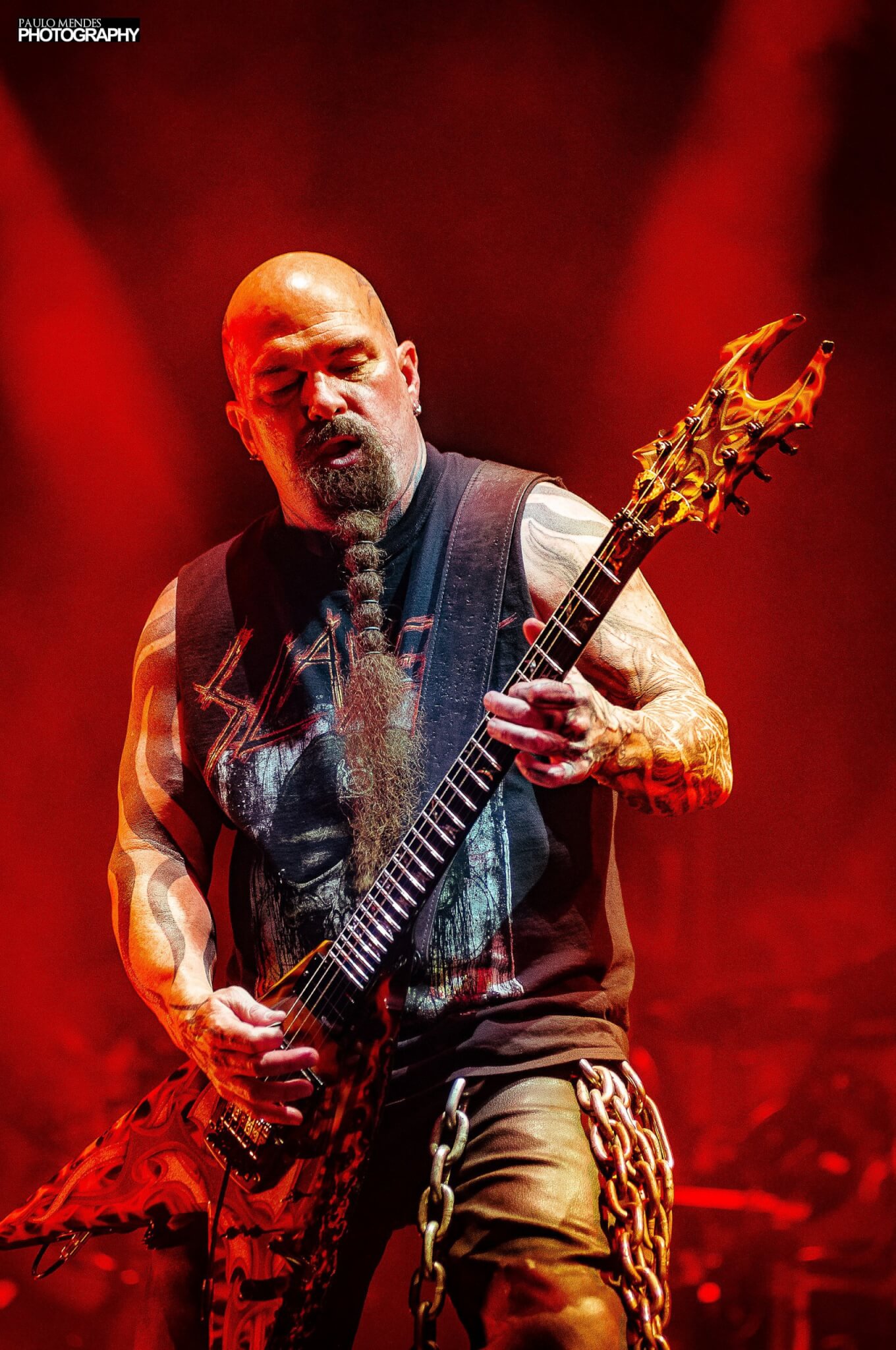